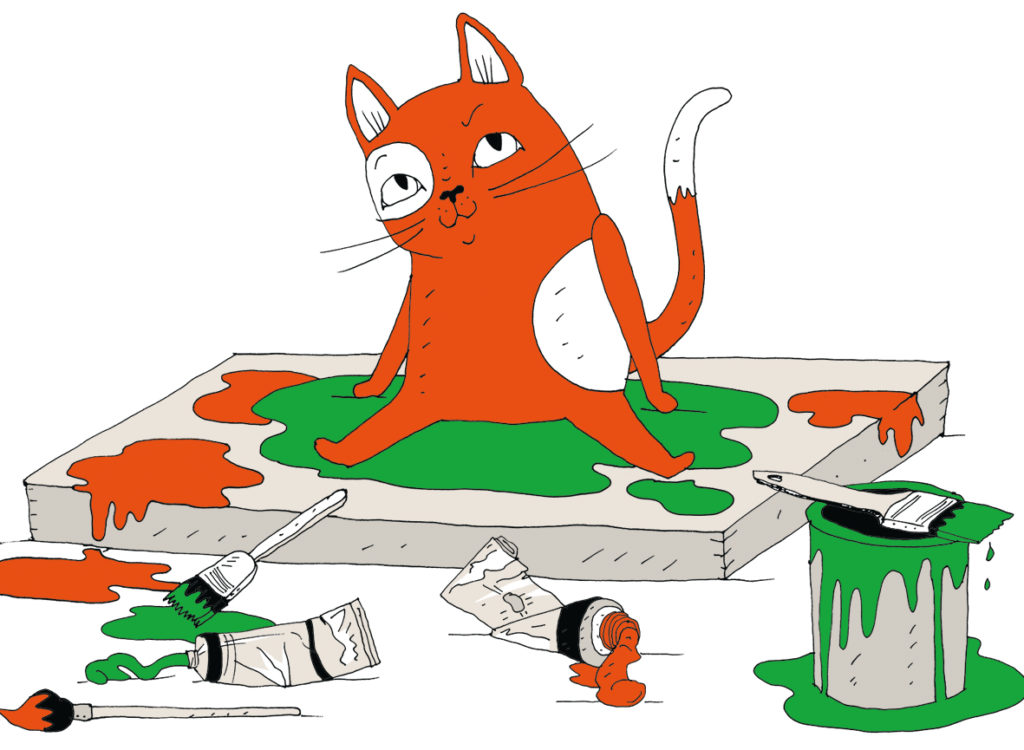 A legend say that one can hear mysterious purring in the corridors of the museum. Ateneum’s museum guards say that the noise may come from one of the descendants of artist Ville Valgren’s several cats. Over a hundred years ago, the famous sculptor built a whole house in the backyard of his Paris home for all the cats in his neighbourhood!

The cat will be introduced to the general public for the first time on the first weekend of May, 5.-6.5., during the Kids’ Fest organised by Ateneum Art Museum and book publisher Tammi. The event is aimed for all the family, and some of the fun activities at the fest include tote bag decorating, getting to know Finnish art classics and meeting well known kids’ book characters like the Moomins and the Hyper Hamster.

Jenna Kunnas, the creator of the new cat character, is hosting a meet and greet in the courtyard of the museum, located on the ground floor, on Saturday 5.5. at 12.30-13.30. She’ll be signing her new book Hämärävaarit, together with author Noora Kunnas. You can see the whole schedule for the event here.

The cat has made a home for itself but hasn’t got a name yet. During the weekend of the festival, visitors can suggest names for the new pet of the museum. The winner of the naming competition will be announced the weekend after the festival. All participants of the naming competition will be entered into a raffle for an opportunity to win a gift bag worth of 100€, full of goodies including the new cat designs from the Ateneum museum store. 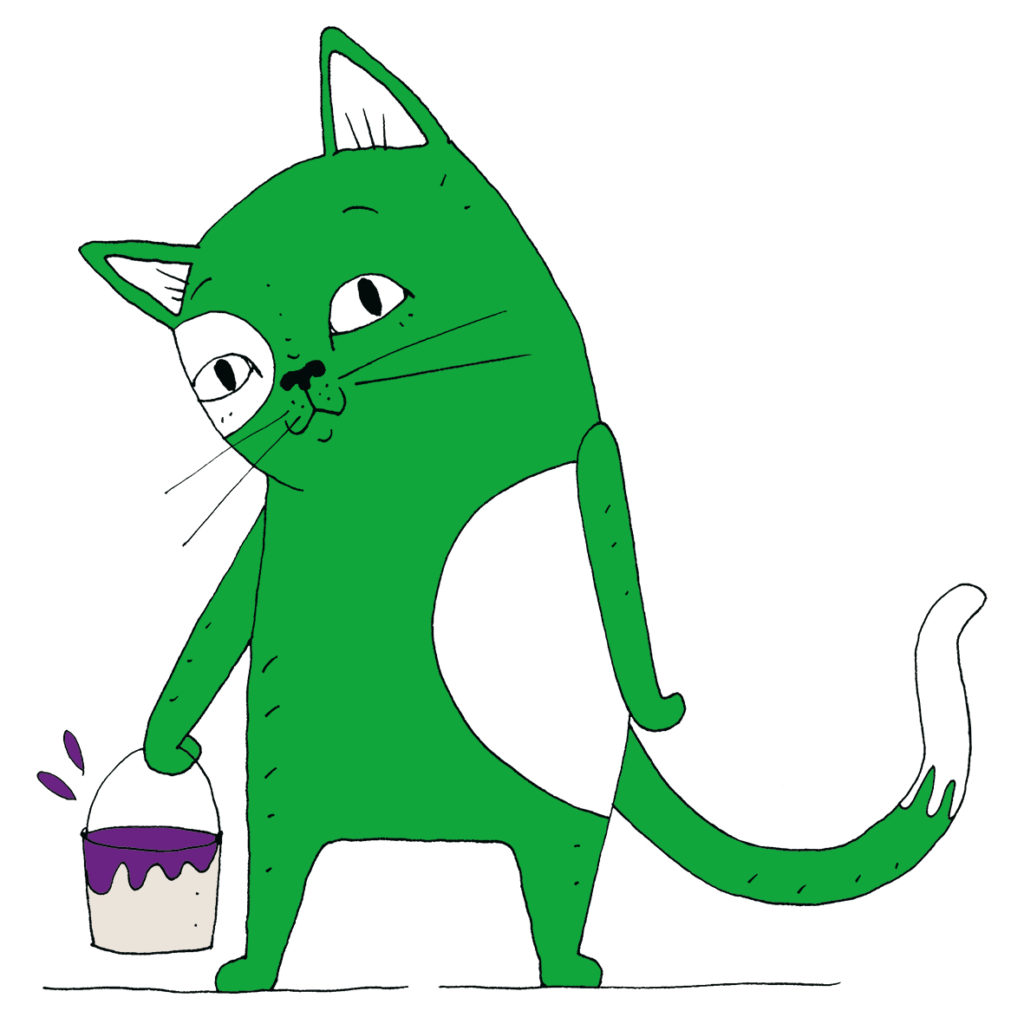 Ateneum Art Museum’s marketing director Jonna Hurskainen shares with us how the idea for the new character came to be, and how they chose the artist:

Ateneum’s own character is a really new and fresh idea! Where did the idea come from?
Children and families are an important target group for us, and we aim to include them in everything we do. We wanted a character that we could use in marketing, as well as a character that could have its own line of products in the museum store that are aimed to please children.

How did you end up choosing Jenna Kunnas as the designer for this character?
We asked Napa Agency to send us a few illustration proposals, and Jenna’s illustrations were so fresh and happy that they immediately felt like a great fit for our brand. We especially liked the idea of a cat for us, as the sculptor Ville Vallgren really did have several cats living in his studio in Paris.

What was the design process for the character like?
We chose Jenna’s work from a few proposals sent to us by Napa Agency. We mulled them over at the museum with a large team, and after a few suggested changes Jenna shaped the character to fit to our needs. A lot of work went into choosing the character and there were several points of view to consider: everything from franchising to genderising.

Where will we be seeing this adorable cat?
The cat will be visible in our marketing and public relations, at the Kids Festival, as well as at the museum store with its own line of product which will expand throughout the years. 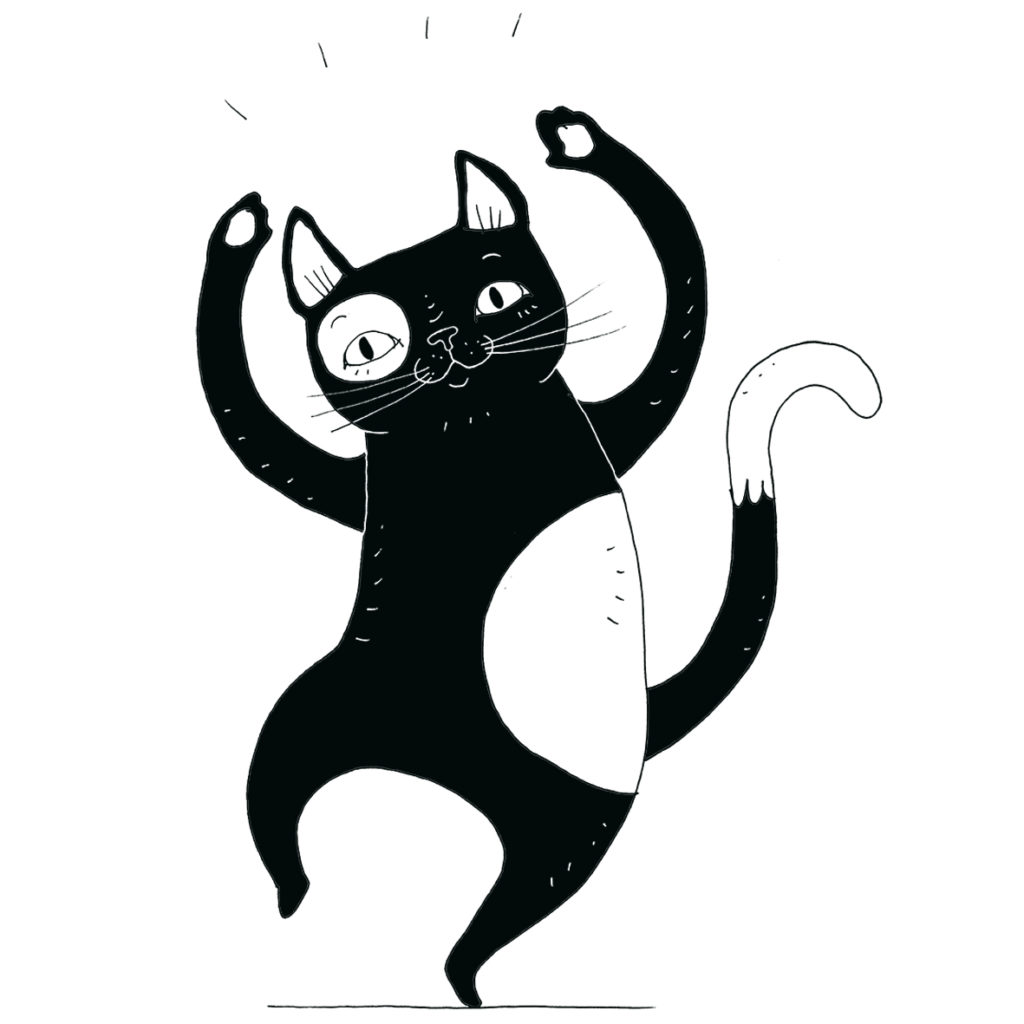 We asked the cat’s illustrator Jenna Kunnas what it felt like to design the top cat in the Finnish art scene:

You’re an experienced and talented illustrator. What was it like to design a character for such an important client like the Ateneum Art Museum?
Of course it was great! I was very honoured to be chosen to design this character. I never thought I’d get my work into the Ateneum!

The cat is a very fun and expressive character. What was the design process like?
I took walks around the Ateneum Art Museum and explored the museum’s history. I wanted something soft and sympathetic, a versatile character and in the beginning I sketched several different animal, and other kinds of, characters. Eventually a cat felt the most natural to me. A quick and confident cat could very easily reside at the Ateneum, why couldn’t it be one of the descendants of sculptor Ville Vallgren’s cats?

On the other hand, Ateneum Art Museum is a very challenging customer. The character has to fit several purposes and events. It has to be funny, interesting, kid friendly, worthy of Ateneum’s prestige and still have paint on its paws and a twinkle in its eye all at the same time.

You’ve designed characters for children before, including the book Hämärävaarit which you created together with your sister. What kind of an audience are children? Do you receive a lot of feedback?
You shouldn’t underestimate children, because you can’t fool them into liking something they don’t like. Kids are witty, smart and honest, so.. a very challenging but a rewarding audience. One of the main purposes of Hämärävaarit and the other children’s books we’ve created is to inspire kids to read. When kids give you feedback, it’s a great thing. Kids don’t know how to keep their opinions to themselves, so all feedback tells you that the characters and story have stuck with them. It’s incredibly rewarding.

As well as the Kids’ Fest, the cat will be adorning products at the museum store. Where else would you like to see the cat in the future?
On a ten meter banner outside the Ateneum Art Museum front wall, of course! Or more simpler, it would be fun to see if one could spot the cat’s paw prints or the tip of its tail lurking somewhere on the museum’s halls. It’d be also great to see a passerby with a cat tote bag when walking in the city. Maybe annual cat-days could also be a fun event.

Ateneum Art Museum’s commission has also been a remarkable case for the agency representing the illustrators. It’s been interesting to follow the team work between the gifted illustrator and the Finnish National Gallery. We are excited to see where else one can spot the cat as well as the in the merchandising. Will we see it on kids’ tours or maybe on video screens? It’s also exciting to see how the youngest in families will take on the character, as well as hear all the fun naming suggestions!